A Tool Party with the Boys 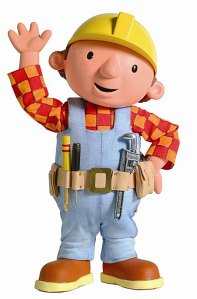 As soon as my best man Sam got the job he hit the ground running with ideas for the pre-wedding social events beginning with the Tool Party. Sam claims the tool party to be a unique event which he invented (or at least perfected) and I have no reason to doubt him as the first tool party I ever attended was his own tool party a couple of years ago.

What is the tool party you may ask? Well it is a gathering of men, usually around cooked meat of some kind and chilled drinks for the purpose of…well gathering. Being a tool party the attendees also bring a small tool that will be of help in married life. The invitation emailed out by Sam to my male family and friends included a picture of Bob the Builder with the wording “Let’s give him all the tools he’ll need to have wedded bliss” and the instructions to come dressed in hard hat, fluoro vest or other similar manly work wear.

Not one to do things by halves, Sam had recruited his extended family to make the day a success. Sam’s sister in law made some dishes for lunch and sent them over, Sam’s wife assisted on the day and Sam’s brother in law Tony set up and looked after the 31kg spit roast. Yes you did read that correctly, there was a 31kg piece of beef leg rotating and being basted over hot coals! Tony generously brought along his spit roaster and spent the day and well into the night creating the best spit roast I have ever tasted. We did our best on the spit roast but we were barely able to make a dent in the massive piece of meat so Sam’s extended family came over that night to help in the process of eating through it.

As well as the salads and spit roast the backyard was mostly filled up with a huge inflatable velcro wall and matching velcro suits (also provided by Tony). This novel activity was well used with the guys taking off hard hat and shoes to run and throw themselves against the wall. A few of the chaps managed to do a back flip and stick themselves upside down which was very amusing to watch.

One of the other activities of the afternoon involved me having to name the various tools I had been given and what they would be used for. I established that most of them could be used in the assembly of IKEA furniture and the putting up of picture frames but if the handy man work needed is more than that I may be out of my depths!

Even though I said to Sam in the beginning that I would be happy to have no pre-wedding parties it was, I concede, a good idea. Besides the generous gifts of those who came and the generous gift of Sam’s family helping prepare the day, it provided us with an opportunity to catch up and deepen friendships. It probably doesn’t need me to point out that men are not as good as their female counterparts as connecting especially at a deeper level so any opportunity for genuine friendship building is time well spent. Thanks Sam!

Comments Off on A Tool Party with the Boys